The Dog Days of Summer

The dog days of summer occur during the hottest and muggiest part of the season. Webster defines “dog days” as the period between early July and early September when the hot sultry weather of summer usually occurs in the northern hemisphere.

Dog Days of Summer – What are they?

The Dog Days of Summer occur during the hottest and muggiest part of the season. Webster defines “dog days” as the period between early July and early September when the hot sultry weather of summer usually occurs in the northern hemisphere. This time period is usually filled with fun sunny day activities such as swimming, barbecues and having outdoor fun with dogs.

Why do we call hot, sultry days
“dog days”? 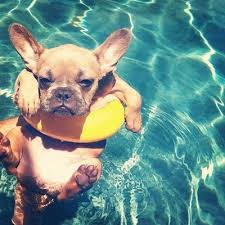 The Term dog days has an interesting origin. It derives from the Latin dies caniculares, or “days of the dog.”

In ancient times, when the night sky was unobscured by artificial lights and smog, different groups in different locations drew images in the sky by “connecting the dots” of stars. The images drawn were dependent upon the culture:

They saw bear images, (Ursa Major and Ursa Minor), twins, (Gemini), a bull, (Taurus), and others, including dogs, (Canis Major and Canis Minor).

In Greek mythology, Canis Major was a large dog and Canis Minor the smaller dog belonging to the great hunter Orion. 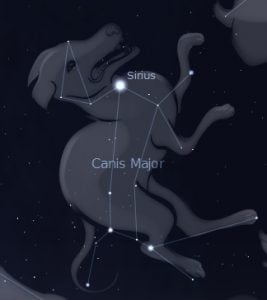 The brightest of the stars in Canis Major (the big dog) is Sirius, which also happens to be the brightest star in the night sky. In fact, it is so bright that the ancient Romans thought that the earth received heat from it. The Romans marked this period with many religious festivals and observances. You can look for Sirius in the southern sky (viewed from northern latitudes) during January.

In the summer, however, Sirius, the “dog star,” rises and sets with the sun. During late July Sirius is in conjunction with the sun, and the ancients believed that its heat added to the heat of the sun, creating a stretch of hot and sultry weather. They named this period of time, from 20 days before the conjunction to 20 days after, “dog days” after the dog star.

The conjunction of Sirius with the sun varies somewhat with latitude. And the “precession of the equinoxes” (a gradual drifting of the constellations over time) means that the constellations today are not in exactly the same place in the sky as they were in ancient Rome. Today, this occurs during the period between July 3 and August 11. Although it is certainly the warmest period of the summer, the heat is not due to the added radiation from a far-away star, regardless of its brightness. No, the heat is a direct result of the earth’s tilt. Many also believe that the sun is closer to the earth during dog days. Since earths orbit is not a perfect circle there is a part of the year when the earth is closer to the sun, however this is not the reason for the  heat or the dog days of summer.

The Northern Hemisphere actually has winter when earth is closer to the sun and summer when it is the furthest distance from the sun. As mentioned earlier the heat and seasonal change is due to the tilt of the earth which is about 23.5 degrees. On June 21st, 2022 because of the earths tilt the northern hemisphere’s direct path of the Sun mean less sunlight is scattered before reaching ground because it travels through a shorter amount of atmosphere which produces hotter weather. In contrast because the tilt causes a lower sun angle the southern hemisphere is having it’s winter solstice and produces shorter days and the energy the sun produces will have to travel through more atmosphere which will cause it to scatter before reaching the ground producing cooler temperatures.

Having a time of hot weather governed by a dog may have been seen as fitting because dogs themselves are often associated with heat — just ask anyone who’s furry friend likes to curl up on the couch next to the air conditioner,  lay on the cool ground or even lounge in a pool!

Other Interesting Facts About Dog Days