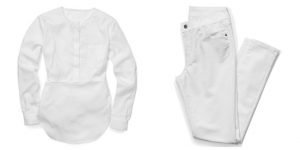 Labor Day is an official holiday in the United States. It celebrates the Labor Movement and also celebrates the millions of workers who help the country move forward. This holiday is traditionally observed on the first Monday in September and many work establishments shut down for the day and festivities are held to increase the moral of all the workers in the country.

Labor Day is considered the end of the summer reason and the start of the fall season. It is one of the last weekends of summer where families get together for barbeques and summer fun before packing it all away and worrying about school and the upcoming winter. Labor Day has also been associated with many fashion trends and superstitions such as the fashion rule regarding white pants after Labor Day.

The History behind the Fashion Rule

It is believed that at the start of the 20th century, the period between Memorial Day and Labor Day was the summer season. The summer season was a time for socialites and wealthy businessmen to shed their responsibilities and leave the city for summer vacations and resorts. White outfits were quickly associated with summertime because they reflected the sun and the fabric was more breathable. White was also associated with freedom from obligation, while corporate business attire was traditionally dark colored and formal.
The early 20th century also saw an increase in wealth for many Americans. It became difficult to discern the differences between respectable old money, and the new money. People of old money felt that they were better than the people of new money and started instigating fashion rules to help discern the status differences. The fashion rules were extensive and included specifications such as: a dress should have a specific sleeve length otherwise the wearer wasn’t worth the time of day.

The rule about not wearing white after Labor Day came into play sometime in the early 1900’s. One school of thought considered white clothing as something that was supposed to be saved for summer time and anyone caught in white after Labor Day would cause a scandal. A second school of thought used this rule to differentiate between old money and new money by encouraging old money not to wear white so that new money stood out. Finally a third school of thought for this phenomenon is that in this time, dry cleaners and hefty amounts of clothes safe bleach were not available so if a white garment became stained it was extremely hard to clean it.

The Result of the Fashion Rule

Even a century after the rule was made we still hear about it today. The white after Labor Day rule no longer applies exclusively to the rich and famous. The rule applies to everyone who feels the need to follow it. There are rule breakers that will step out in white pants and magazines will write about how they are trendy and pushing the fashion rules. Today the no white after Labor Day rule is just an extra excuse to push fashion trends.

If asked, many woman today would still answer that they wouldn’t wear white after Labor Day because they are looking forward to the warmer colors associated with the autumn season. When in doubt about wearing white, choose cream.