Thanksgiving Day. History, Tradition, and Meal of the Holiday 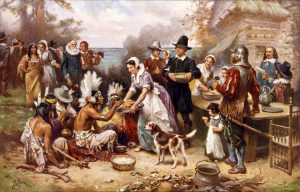 Thanksgiving Day is a holiday celebrated by Americans on the fourth Thursday of November. It celebrates the story of the Pilgrim’s meal with the Native Americans and is reserved as a day to spend with loved ones and for giving thanks amongst each another.

Most families observe Thanksgiving with a large meal and sometimes a religious service. Many countries observe a variation of this celebration or have a different holiday along the same themes. It is common to mark the harvest season with celebratory meals and festivals of thanks within many religions and communities, a theme which dates back to ancient pagan festivals. Protestant religions have many connections to the harvest festival of Thanksgiving.

The most widely practiced ritual is the Thanksgiving meal. This usually includes turkey, mashed potatoes, dressing, cranberry sauce, corn, sweet potatoes, and pumpkin pies, but many feasts differ between families and cultures. Many see Thanksgiving as a celebration of the harvest, especially farmers, and a commemoration of the pilgrims’ successful harvest with the help of Native Americans.

While Thanksgiving is mainly connected to the feast of the Pilgrims, the Puritans started the tradition before coming to the New World. The Catholic Church had instituted so many special days of remembrance, thanks, feasting, fasting, and resting that the Puritans wanted to remove all holidays and only celebrate Days of Thanksgiving or Days of Fasting. These were observed after an act of special providence, which was a disaster or threat of disaster the Puritans believed was as a result of judgment from God. Events observed with Days of Thanksgiving include the English conquering of the Spanish Armada in 1588 and the 1606 Gunpowder Plot catastrophe.

While Thanksgiving is believed to have origins with the Pilgrims’ meal at Plymouth in 1621, this event was not given proper documentation and many do not wish to involve the relationship of the settlers with the Native Americans on this holiday, given the two groups’ violent history. The story goes that after the Pilgrims’ Plymouth colony had a difficult winter filled with disease, starvation, and death, the colony received assistance from Squanto and his Patuxet tribe. The Native Americans allegedly taught the pilgrims to grow their own crops and other methods of survival in the New England environment, in particular, the method of using fish to fertilize corn crops. After their first successful harvest, the Pilgrims celebrated with a feast at which Squanto and members of his tribe were in attendance.

Squanto and The Settlers

However, this story is widely debated, as similar stories originate from Spanish settlements and other groups of settlers. Due to this, the story is widely regarded as a cultural myth. In fact, it is believed Squanto knew how to communicate with the settlers because he was previously enslaved by John Smith and taken on several voyages back to England before returning to his homeland to find the Patuxet tribe eliminated through disease, which was spread by the settlers. With no home tribe, Squanto, also called Tisquantum, settled with the English at the Plymouth colony, later serving as a guide and translator for the settlers as they visited Native American tribes. But many of these tribes distrusted Squanto for his allegiance with the settlers. The holiday’s true origins are attributed to the Puritan Feast of Thanksgiving, a tradition which many pilgrims observed in the New World.

Thanksgiving celebrations in the United States used to differ according to state. Thanksgiving was traditionally celebrated on the last Thursday of November in the early 1800s. Sarah Josepha Hale is a writer known for campaigning for an official date for 40 years through letters to political leaders. In 1863, President Lincoln issued a proclamation in which all states will celebrate Thanksgiving on this day. This act was an effort to unite the North and the South, but due to the rebellion of the North’s authority, Thanksgiving was not consistently celebrated on the same day until after Reconstruction. A joint resolution was signed by Congress and President Franklin D. Roosevelt in 1941 to change Thanksgiving to the fourth Thursday of November rather than the last, believing the earlier economic boost to be beneficial to the United States economy.

There are many foods associated with the holiday of Thanksgiving, including turkey and cookies. Other common foods and drink include: 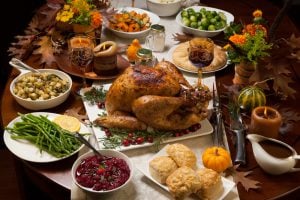 There are a few Thanksgiving traditions besides the meal. Many churches hold a special Thanksgiving Day service centered on praising God. At the Thanksgiving meal, many families observe the ritual of going around the table to express what each member is thankful for. Some family members will travel long distances to attend this yearly reunion.

During the Thanksgiving meal, the family may break the turkey wishbone. Whoever pulls away the larger piece is granted a wish. The President of the United States also traditionally pardons a live turkey, meaning the turkey will live on a farm without threat of being eaten.

Some will observe Thanksgiving through charity work. Common activities include serving and preparing meals at homeless shelters and soup kitchens, organizing food and clothing drives, and participating in community outreach programs.

Many countries all over the world celebrate a day of thanksgiving, many of which center on a successful harvest season: