The Catholic Church wanted to eclipse the festivities of a rival pagan religion that threatened Christianity’s existence. The Romans celebrated the birthday of their sun god, Mithras during this time of year. Although it was not popular, or even proper, to celebrate people’s birthdays in those times, church leaders decided that in order to compete with the pagan celebration they would themselves order a festival in celebration of the birth of Jesus Christ.

Although the actual season of Jesus’ birth is thought to be in the spring according to history, the date of December 25th was chosen as the official birthday celebration as Christ’s Mass so that it would compete for head-on with the rival pagan celebration. Christmas was slow to catch on in America. The early colonists considered it a pagan ritual. The celebration of was even banned by law in Massachusetts in colonial days. From 1659 to 1681, anyone caught celebrating Christmas in the colony would be fined five shillings. Our modern so-called “war on Christmas” pales in comparison to the colonial war on that holiday perpetuated by the earliest Christians in America.

Two hundred years before the birth of Christ, the Druids used mistletoe to celebrate the coming of winter.

They would gather this evergreen plant that is parasitic upon other trees and used it to decorate their homes. They believed the plant had special healing powers for everything from female infertility to poison ingestion. Scandinavians also thought of mistletoe as a plant of peace and harmony. They associated mistletoe with their goddess of love, Frigga. The custom of kissing under the mistletoe probably derived from this belief. The early church banned the use of mistletoe in Christmas celebrations because of its pagan origins. Instead, church fathers suggested the use of holly as an appropriate substitute for Christmas greenery. Today they are widely used throughout Christmas and remain popular Christmas symbols.

Poinsettias are now widespread beautiful Christmas and holiday decorations. They are native to Mexico. They 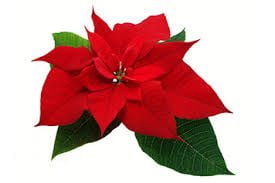 were named after America’s first ambassador to Mexico, Joel Poinsett. He brought the plants to America in 1828. The Mexicans in the eighteenth century thought the plants were symbolic of the Star of Bethlehem. Thus the Poinsettia became associated with the Christmas season. The actual flower of the poinsettia is small and yellow. But surrounding the flower are large, bright red leaves, often mistaken for petals.

The Christmas Tree is the most popular symbol and originated in Germany in the 16th century. It was common for the Germanic people to

decorate fir trees, both inside and out, with roses, apples, and colored paper. It is believed that Martin Luther, the Protestant reformer, was the first to light a Christmas tree with candles. While coming home one dark winter’s night near Christmas, he was struck with the beauty of the starlight shining through the branches of a small fir tree outside his home. He duplicated the starlight by using candles attached to the branches of his indoor Christmas tree. The tree was not widely used in Britain until the 19th century. It was brought to America by the Pennsylvania Germans in the 1820’s.

The appeal of the Christmas light is often likened to the starts in the sky, or the glisten of freshly fallen snow in the moonlight. Early Christmas lights were not quite as safe as today’s light strings. Candles were used in trees inside the home, and lit in windows. Hot flames and live trees were not the safest mix, but the temptation to add lights to Christmas decorating was too strong to curb. Many factors have contributed to the widespread use of lights, including lighting contests promoted by manufacturers, war propaganda using holidays as an opportunity to bond the nation, and local celebrations across the country to try and start traditions of hope and peace. Light strings are now found in all shapes, sizes, and colors, as well as in cool-to-the-touch LEDs.

This abbreviation for Christmas is of Greek origin. The word for Christ in Greek is Xristos. During the 16th century, Europeans began using the first initial of Christ’s name, “X” in place of the word Christ in Christmas as a shorthand form of the word. Although the early Christians understood that X stood for Christ’s name, later Christians who did not understand the Greek language mistook “Xmas” as a sign of disrespect.

Candy canes have been around for centuries, but it wasn’t until around 1900 that they were decorated with red

stripes and bent into the shape of a cane. They were sometimes handed out during church services to keep the children quiet. One story (almost certainly false) that is often told about the origin of the candy cane is as follows:

In the late 1800’s a candy maker in Indiana wanted to express the meaning of Christmas through candy. He came up with the idea of bending one of his white candy sticks into the shape of a Candy Cane. He incorporated several symbols of Christ’s love and sacrifice through the Candy Cane. First, he used a plain white peppermint stick. The color white symbolizes the purity and sinless nature of Jesus. Next, he added three small stripes to symbolize the pain inflicted upon Jesus before His death on the cross. There are three of them to represent the Holy Trinity. He added a bold stripe to represent the blood Jesus shed for mankind. When looked at with the crook on top, it looks like a shepherd’s staff because Jesus is the shepherd of man. If you turn it upside down, it becomes the letter J symbolizing the first letter in Jesus’ name. The candy maker made these candy canes for Christmas, so everyone would remember what Christmas is all about.

The original Santa Claus, St. Nicholas, was born in Turkey in the 4th century. He was very pious from an early 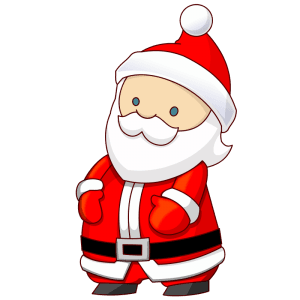 age, devoting his life to Christianity. He became widely known for his generosity for the poor. But the Romans held him in contempt. He was imprisoned and tortured. But when Constantine became emperor of Rome, he allowed Nicholas to go free. Constantine became a Christian and convened the Council of Nicaea in 325. Nicholas was a delegate to the council. He is especially noted for his love of children and for his generosity. He is the patron saint of sailors, Sicily, Greece, and Russia. He is also, of course, the patron saint of children known for the saying “Ho Ho Ho Merry Christmas“. The Dutch kept the legend of St. Nicholas alive.

In 16th century Holland, Dutch children would place their wooden shoes by the hearth in hopes that they would be filled with a treat. The Dutch spelled St. Nicholas as Sint Nikolaas, which became corrupted to Sinterklaas, and finally, in Anglican, to Santa Claus. In 1822, Clement C. Moore composed his famous poem, “A Visit from St. Nicholas,” which was later published as “The Night Before Christmas.” Moore is credited with creating the modern image of Santa Claus as a jolly fat man with a beard who rides around the sky using flying reindeer. Illustrator Thomas Nast, in the late 1800s, gave Santa his lasting visual impression by drawing him thousands of times in Harper’s Weekly, and it was he who suggested that Santa lived at the North Pole. It was the Coca-Cola Company in 1931 who made Santa’s suit red. In an advertising campaign, Coca-Cola commissioned the use of Santa Claus drinking a bottle of Coke. The company insisted that Santa be wearing a Coca-Cola red outfit.

No, these are not the edible kind of cracker nor a firecracker. They are a British Christmas tradition invented

by Tom Smith in 1847. Christmas Crackers are a small cardboard tube covered with a brightly colored twist of paper. The cracker is pulled by two people, each holding one end of the twisted paper. When the tube is pulled apart, friction causes a narrow strip of chemically treated paper to create a small explosive POP revealing a small gift inside. Crackers may also be used at other celebrations such as Valentine’s Day parties.