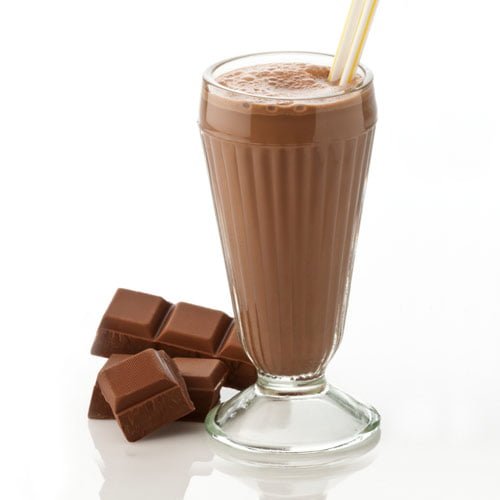 There are many different ingredients that can be added into a milkshake. Items such as cinnamon, vanilla extract, and ancho chili powder can all help boost the flavor of the chocolate and give the milkshake a more exotic flavor. Whipped cream typically garnishes the top of the milkshake and is often topped with chocolate shavings or diced nuts. Traditionally, a single cherry would garnish the whole chocolate milkshake off because of the flavor combination between chocolate and cherries. Every diner has their own special recipe for creating this delight with variation in the quantity of the individual ingredients.

Interestingly, milkshakes originally started out as alcoholic beverages in the 1880’s. Their popularity quickly evolved so that they ditched the alcohol and began being sold in pharmacies and many diners. They have been adapted many times over the years. They included the use of malted milk powder that was popularized by many pharmacy chains because it was an easy to digest drink suitable for the elderly and small children.

In the 1940’s and 1950’s chocolate milkshakes saw an increase in popularity, particularly with the younger generation. Diners all across the country were selling a large variety of milkshakes with one of the most popular flavors being chocolate. Each diner had their own method of creating the chocolate milkshake and the options became more diverse. The increased diversity led to many interesting milkshake creations such as the chocolate “concrete” milkshake. This “concrete” milkshake was so thick that the server could hold the whole cup upside down and the mixture wouldn’t spill.

Over the years, chocolate milkshake has continued to adapt. Today milkshakes are being created using liquid nitrogen in some establishments while others continue to use more traditional methods to make and serve it.