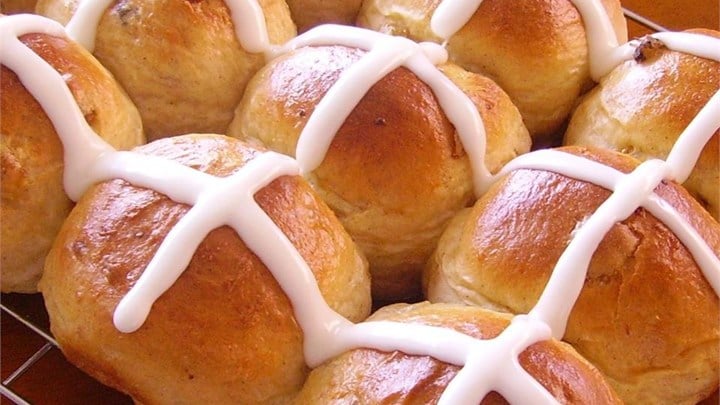 The hot cross buns have been around for centuries. It is believed that the Ancient Greeks enjoyed the pastries and were the ones to first put the cross on them. Interestingly, although many people associate the cross with the burden that Jesus Christ endured, the original intention of the cross was to symbolize lost loved ones. The first actual record of the hot cross bun was in 1733.

The sales of these sweet buns were banned during the reign of Elizabeth I. There was a decree issued that forbade the selling of the sweet bun and other spiced breads. It was during this decree that many people chose to learn how to make their own buns in their own kitchens.

There are many superstitions surrounding the hot cross bun that have helped to increase their popularity. There were many who believed that the hot cross bun served some sort of medicinal purpose. They thought that giving a small piece of the bun to someone that was ill that it would miraculously allow them to heal. There are other superstitions that say if you were to take these spiced buns on a sea voyage that they would protect the vessel against any damage. There is also a belief that if you hang these spiced buns around your kitchen, then it will protect your home from fire and guarantee your perfect bread.

One of the easiest ways to celebrate National Hot Cross Bun Day is to indulge in a deliciously spiced bun. They are easy to make and many recipes are available to ensure that you find the right hot cross bun. The hardest part about creating the hot cross bun is working with the dough. The dough has to be treated in a specific way so that it will rise and be the correct consistency. This dough preparation makes the hot cross bun a difficult project for beginner bakers. These spiced buns are also available in many small bakeries and are offered with a variety of spices and small dried fruits. They are best enjoyed hot with a spread of melting butter.