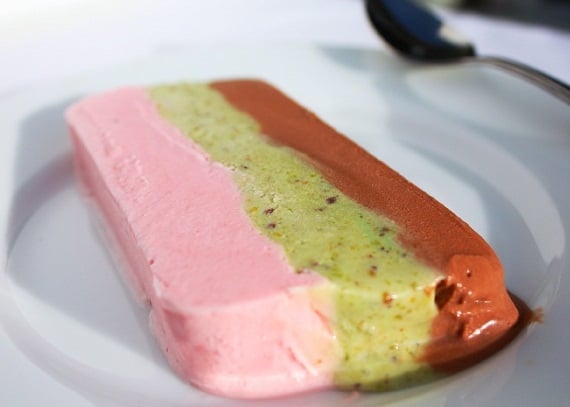 The 21st of August is National Spumoni Day. Spumoni Day is an unofficial national holiday that is observed in the United States. Spumoni is an Italian dessert that is constructed from layers of ice cream, whipped cream, nuts, and candied fruit. There are three layers to a traditional spumoni: chocolate, cherry, and pistachio. Each layer is mixed with nuts and dried fruit to create this special treat.

Spumoni is similar to ice cream, the Neapolitan ice cream, but it is also different. Spumoni is different than ice cream because it is sliced and not scooped. This dessert was crafted in Naples and was brought to the America’s by an influx of Italian immigrants. The late 1800’s saw an influx in immigration and many traditions such as the spumoni were brought over during that time. As the years have gone by, the flavors incorporated in the spumoni have changed and evolved. The most popular flavors for today’s spumoni are chocolate, strawberry, and vanilla. The fruit and nuts are still present along with the addition of other candies.

Spumoni can be adapted into many different applications. There are some chefs who boast about making spumoni cupcakes or cookies. Spumoni has been incorporated with sliced ice cream and liquor soaked sponge cakes. Spumoni has also evolved to include many three flavored desserts. Traditional spumoni can still be found and made. Brooklyn, New York was one of the first places to sell spumoni, which they still do today. Spumoni is layered with one slice of flavored ice cream on top of the other. Each flavor can be infused with candies and nuts depending on the preference of the cook. Spumoni is a visually stunning dessert that evolves with time.

Regardless of tradition versus modernity, Spumoni is still a delicious dessert. In America, spumoni is prepared mainly with chocolate, strawberry, and vanilla ice cream. The ice cream is softened and then sliced. The three flavor layers are stacked on top of each other, in a loaf pan, and the preparer mixes in the fruit and nuts as they see fit. The layers are trimmed so that they are uniform, plastic wrap is placed over the dish, and the whole mixture is then placed in the freezer to harden. Once the mixture had enough time to harden, the preparer would take the loaf out right before serving. The bottom of the pan would be dipped into hot water to help loosen the spumoni. The pan would then be flipped upside down on the platter or serving tray, creating the stunning layered design. Then slices would be taken from the spumoni just like you would slice a cake.

National Spumoni Day is a day to enjoy a delicious sweet treat as well as observe the Italian heritage that accompanies the dish. The immigrants that came to America needed the additional comfort that food from home brought them. Spumoni is not only delicious, but it also brings people comfort, and lets them get closer to their roots.