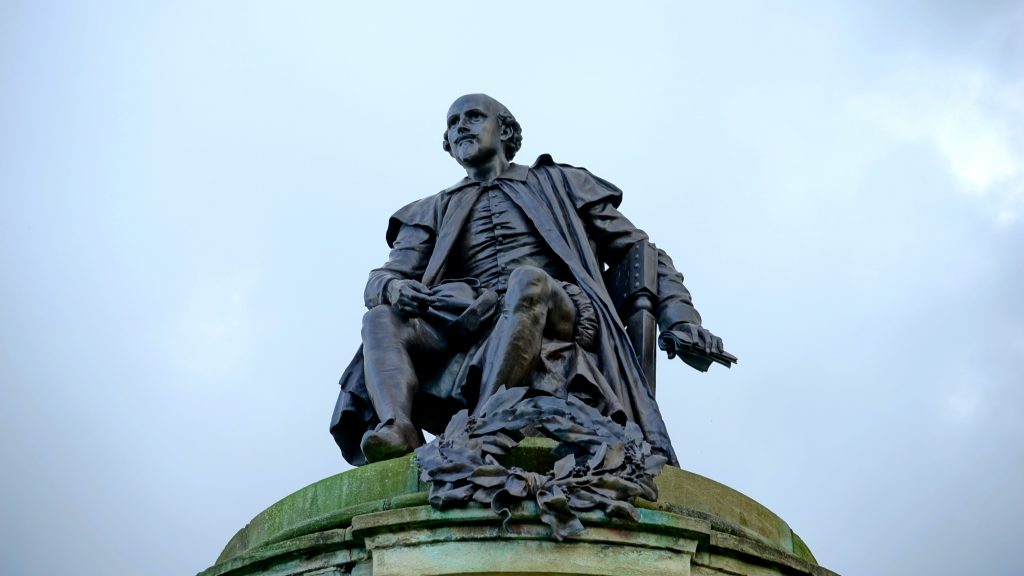 William Shakespeare is the all time most well known and prolific writer in history. His work crosses genres, languages, (he wrote in English) and cultures; his influence has spread far and wide. He has contributed to both high culture as well as pop culture, providing entertaining stories that educated readers as well as theatrically appealing works for a mass audience.

William Shakespeare was baptized on April 26, 1564 in Stratford-upon-Avon. He was born to John and Mary Shakespeare who were both Catholics. The exact date of his birth is not certain but it is estimated that he was baptized around three months after birth. In this time period, religion played a big role in the life of the average Englishman and so, as a consequence, religion played a role in Shakespeare’s early life. His father was a prominent figure in the community. As an entrepreneur, he operated several different ventures including dealing with wool and other commodities, real estate, and even money lending. Shakespeare’s father became fairly wealthy as a result of his business acumen. His mother was not nearly as successful due to her inability to profit from land deals and her modest dowry.

However, his father’s business ventures began to fail when Shakespeare was only seven years old. This is due in part because of the loss of profits that came with the passing of Henry VIII and the beginning of the English Reformation. With this act, England became officially Protestant and Catholicism was outlawed. While it is not certain why John Shakespeare moved away from one of the most popular religions in England, it is believed that his own religious convictions played a role. There is evidence that John Shakespeare may have been a secret Catholic all along and was just trying to fit in with society at large.

So little is known about young Shakespeare because his early life was not documented very well and there are no known birth records for the first seven years of his life.

He was a normal child in a normal family, and he spent much of his time fishing and going to local fairs with his dad. Shakespeare’s education was just as average as everything else about him. At age seven he began attending the free school in Stratford where he learned Latin and the Classics, including works by Ovid. He attended school in Stratford until he was sixteen when he married Anne Hathaway. Anne was eight years older than Shakespeare. Despite this age difference, she bore him three children by the time that he turned eighteen.

After marrying Anne, Shakespeare relocated to London for reasons that are not known. It is believed that he wanted to be an actor but it may have just been a desire to leave home. He still remained in contact with his family and would frequently return home to visit them. There is no record of Shakespeare doing anything notable in London for the next ten years, yet he eventually became a successful actor and playwright.

As for Shakespeare’s influence, words coined or popularized include “swagger,” “critical,” “eyeballs” and of course the infamous “assassination.” Shakespeare is so prolific that entire industries exist to cover his works, including academia with its multiple postgraduate degrees, journals with thousands of articles written on him every year by professors and teachers, expert lawyers who specialize in Shakespeare due to his prominence in common law, and hundreds of books including essay collections on him. On top of this is the industry of productions; many theaters across the world produce his works annually with full casts and orchestras (sometimes they add interpretation such as CGI or modern vernacular.)

People often feel like they know William Shakespeare, the English Renaissance dramatist and poet, but do we truly understand him? Or did he remain a mystery even in his own time? Though we may not know all of the details about him or be able to answer all questions about what he was trying to say in his works, one thing is certain: William Shakespeare had a huge impact on English literature. Even more importantly, he has inspired countless writers worldwide for over 400 years.

Shakespeare’s overall body of work, which included comedies, tragedies, poems and romances, can be categorized into two distinct groups of plays: the history plays and everything else (which includes comedies, tragedies, poems and romances). Plays such as Richard III, Henry V, Julius Caesar and Hamlet are often seen as Shakespeare’s best work. He is credited with writing 38 plays totaling roughly 29000 lines of verse—that’s an average of about 1474 lines per play.

Shakespeare has had a very profound effect on society in general and continues to do so because of his popularity and the number of talented actors who have chosen to play roles in his books and plays. But although he could be considered popular in some forms, many people do not know much about him. Although Shakespeare has not been credited with being a religious figure or even a particularly good writer, he does have an immense following, which explains why many would consider him the most influential writer in history.

In 1592 Shakespeare’s first major play was performed, Henry VI Part 1. The play turned into a series that told the story of Harry, Prince of Wales. It was this success that allowed Shakespeare to turn his attention away from acting and towards full time writing. He would spend the rest of his life writing plays (he eventually wrote 38) that were performed in the Globe theater in London.

Shakespeare’s influence on history is multifaceted. He was not only the most influential writer in history, but he also had lasting effects on architecture, politics, and even religion.

Most of Shakespeare’s works took place in England; however some were set further afield to places like Italy or France. By making his plays seem foreign to the audience at the time, he was able to create a sense of distance. This allowed him to control how his audiences reacted to his works by making them withholding in certain scenes. This technique is still used today in television shows and movies when producers want to make scenes seem more significant by distancing the action from the viewers.

This sense of distance also allowed Shakespeare to take advantage of the curiosity that many people have about other cultures. By including scenes at court or some type of ceremony, he could satisfy that need for excitement and information about new styles and trends. Even though his plays were not necessarily accurate depictions of those scenes, they still gave some truth as to how those scenes played out in real life.

Shakespeare also influenced politics by the way that he portrayed current events in his plays. His Henry VI series was written during the War of the Roses, which is England’s longest civil war. Shakespeare’s play presented this war as a struggle between England and France where each country had its own legitimate heir (Henry VI for England and Charles the dauphin for France.) By portraying the war as a battle between England and France, Shakespeare portrayed the English monarchy in an extremely positive light.

Even though this play was extremely popular during its time, Shakespeare’s play Richard III was not very well received by audiences. This is because it presents King Richard III as one of history’s most infamous villains, whereas before history had been portraying him as the victim of a back-stabbing family. This new interpretation was created by Shakespeare to more closely reflect King Henry VII’s ascension to power.

Shakespeare was also a devout Christian and expressed his beliefs through some of his characters including Hamlet. Hamlet even used Scripture at one point in the play to validate his revenge for his father’s death. This is significant because it shows that Shakespeare was not only educated on the Bible, but also influenced by it.

Shakespeare is considered one of history’s most influential writers. His works spanned genres, languages, and cultures; yet he still remained popular with both high society as well as the common people. His works influenced architecture, politics, and even religion. Even though Shakespeare’s life is shrouded in mystery, he still had a large impact on history through his writings.