There is no symbol in North America that better represents the holiday of Halloween like the pumpkin. The Halloween pumpkin, more commonly referred to as the jack-o’-lantern, is an opportunity every October to purchase pumpkins from your local farm or grocery store and then carve them into figures that are lighted on October 31 as part of the Halloween celebration. 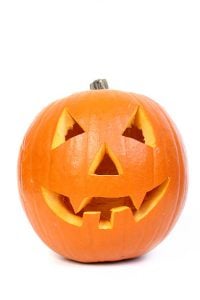 Believe it or not but the Halloween pumpkin actually has roots in ancient Celtic traditions during Samhain, where individuals would take turnips or potatoes and carve into them. The actual jack-o’-lantern traces back to Irish folklore of Stingy Jack, a man who made a deal with the devil to never enter the realms of hell. Unfit for heaven too, Stingy Jack was granted a small coal to keep light in which he put inside a turnip for illumination throughout the night. After years of carving and lighting vegetables like turnips, pumpkins eventually became the primary source for jack-o’-lanterns.

The Halloween pumpkin is a terrific activity for all of the family. The pumpkin alone tastes delicious as the fall season is prime for baking pumpkin pie as well as cooking the seeds that are gutted during the carving process. After a round hole is cut around the top of the pumpkin, festival-goers open it up and pull out the seeds. Once the inside is cleaned, the Halloween pumpkin is ready to be carved. What you decide to carve your pumpkin into is completely up to you.

Some people like to carve pumpkins into the traditional jack-o’-lantern face, a relatively simple concept where you carve two triangle eyes, one nose and a wicked looking smile for the mouth. There are kits available at retail stores that enable carvers to trace complex designs of witches, ghosts, bats and other monsters. After you are finished carving the pumpkin it can be set aside and illuminated with a small candle on the night of October 31.

The pumpkin is a terrific way to be introduced to the customs of Halloween for those who haven’t participated in it before, as well as the annual tradition of many families for years upon years. If you have not had the opportunity to teach your children the history of the Halloween pumpkin, including its connection to the old Irish folklore of Stingy Jack, consider doing it this year on the 31st.