Although the muskrat might look something like a beaver, it is actually in a different family of rodents, the Cricetidae, which includes the hamsters, lemmings, voles, and those rats and mice native to the Americas. It is the largest member of this family, which also includes, at the other size extreme, the New World pygmy mouse. Within this family, though, the muskrat is most closely related to the voles and lemmings.

One of the most notable differences between the muskrat and beaver, besides the muskrat’s smaller size, is the tail. Beavers have the familiar “beaver tail,” wide and flat, whereas the muskrat’s tail is narrow, and flattened the other way, vertically, allowing it to be used to help with swimming, the way a fish’s tail is. The nutria, another aquatic rodent which is native to South America but has become invasive in North America, has the usual rounded tail of most rodents. Another distinctive characteristic of muskrats is the flaps at the corners of their mouths. They can close these flaps behind their gnawing teeth, and in this way, gnaw without getting water in their mouths.

Muskrats also have certain physiological adaptations to aquatic life. One of these is known as regional heterothermia, which means that they keep their feet and tail at a lower temperature than their body core. This reduces heat loss to the water. They also tolerate higher levels of carbon dioxide in their blood than non-aquatic mammals do.

What Do Muskrats Eat?

Like many rodents, muskrats are omnivorous. Their diet is largely aquatic vegetation – especially cattail, also aquatic roots like arrowhead and lotus – but they will also eat aquatic invertebrates, and even salamanders and fishes. A study in Virginia found that muskrats were inhibiting the recovery of endangered species of freshwater mussels, even though they also ate a lot of the invasive Asiatic freshwater clams in the same river system. They must eat one-third of their weight in food every day, and since they do not store food, they must also remain active throughout the winter. 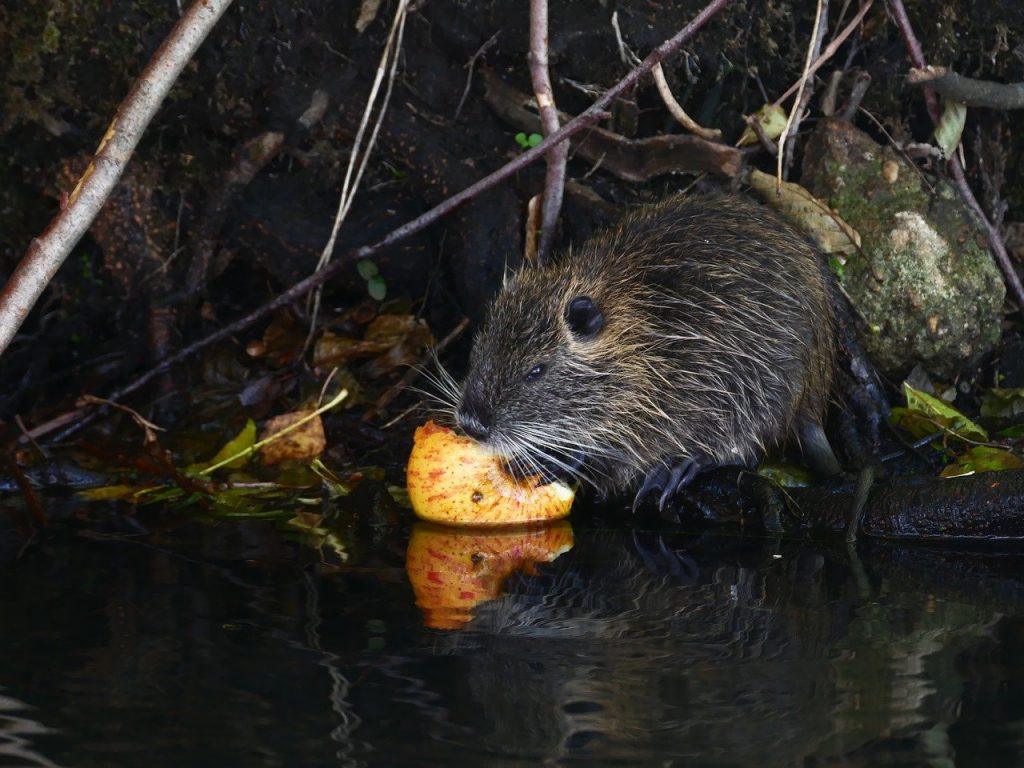 Where Do Muskrats Live?

The muskrat is native to North America from Alaska and Arctic Canada south to the Gulf Coast and the southern Rocky Mountains, and on both the Atlantic and Pacific Coasts, but not in Florida, where the Florida water rat occupies the same ecological niche. Because it has long been valued for its fur, it was introduced into Europe, and is now found from France and the Balkans to Finland, and all the way across Eurasia north of the Himalayas to Manchuria and Kamchatka, and has also been introduced on Tierra del Fuego, Argentina. As often happens with introduced species, it has become problematic in some of these places, especially in Belgium and The Netherlands, where it burrows into the dikes and levees. Due to its potential invasiveness, it is prohibited from being imported into New Zealand.

Like the larger beaver, muskrats live in lodges built in ponds, with the entrance underwater. However, in addition to being smaller, muskrat lodges are built of vegetation such as reeds and cattails, in contrast to beaver lodges built of large tree branches. In other cases, muskrats live in burrows in streambanks, also with the entrance underwater. Muskrats do not build dams like beavers do, but prefer marshes where the water level remains constant. This makes them especially suited to such regions as the Chesapeake Bay region, Minnesota, and the California Central Valley, but they can be found wherever there is shallow freshwater within their wide range: retention ponds, farm ponds, drainage ditches, and even in urban areas such as Rock Creek Park in Washington, D.C.

Muskrats show that rodent adaptability in that where the climate is warm year-round, as in central California, they reproduce year-round, although in seasonally cold climates, they tend to reproduce mostly from April to June. At 25-30 days gestation, and the young able to live on their own at the age of one month, it is common for muskrats to have two or three litters in a year. Females, especially, are aggressively territorial and may kill intruders, although outside the breeding season, territoriality declines, and the muskrats may live in groups. In expansive marsh habitats, a muskrat’s home range may cover 1.14 acres, although home ranges are smaller along river courses, and in any case a muskrat will tend to spend most of its time within 15 meters of the lodge.

Muskrats tend to follow the same routes again and again, which forms trails, just the same way human paths form. In addition to the lodge, a muskrat family will often build smaller structures for eating. In climates with frozen winters, these include what are known as “push-ups”: they swim under the ice up to 100 yards away from the lodge, still following their familiar trails, then chew a hole to the surface and build a smaller, lodge-like dome over it. The dome freezes, forming a protective shell. In the far north, the ice cover can be so complete that the lodge and push-ups are the muskrats’ only access to the air. Fortunately, they can stay submerged up to fifteen minutes between surfacing for air, and may stay on the surface only a few seconds before submerging again. It is these northern muskrats in snowy climates that are valued for their fur, which has been marketed as “Hudson seal,” possibly because people do not like the word “rat.”

Despite their potential to damage dikes and levees, muskrats are important members of the ecosystem. In the Chesapeake Bay, other animals use the tops of muskrat lodges, including turtles and aquatic snakes. They are also prey to many other animals: birds such as owls, harriers, and herons; mammals like otters, coyotes, foxes, and wild cats; and, in the South, alligators. The introduced populations in Russia are preyed upon by jackals, which correspond ecologically to North America’s coyotes. Like a number of other prey animals, their population goes through the kind of boom-and-bust cycles first documented for snowshoe hares and lynx. Their eating of cattails and other vegetation maintains areas of open water in marshes that might otherwise become completely overgrown.

Once we are allowed to examine the Galaxy to which we reside, we often find ourselves awe-stricken by the immense beauty and elegance of the Milky Way Galaxy. The Milky…

How to Calculate Density Imagine for a moment that you have two piles sitting in front of you. In one pile, there is a pound of feathers. The other pile…