On the day after Thanksgiving, Americans celebrate Black Friday, when many stores and malls hold shopping sales and events. This day is unofficially considered the start of the Christmas shopping season. It takes place on the fourth Friday in November. 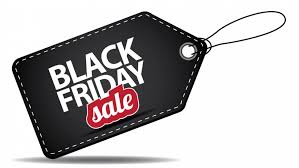 receive after the Thursday of Thanksgiving. As the next large holiday after Thanksgiving is Christmas, many set out to look for Christmas presents on this day off. Since 2005, it has been the largest shopping day of the year in America. Many retailers open early in the morning, some as early as midnight. This evolved from opening earlier and earlier in an attempt to compete with the opening times of other stores. Some retailers, such as Wal-Mart, decided to simply start the retail event the night of Thanksgiving.

Due to the crowds and aggressiveness associated with these shopping events and the growing popularity of online shopping, a Cyber Black Friday features many of the same sales online.

Black Friday is not an official holiday and is mostly associated with shopping. The name may come from a way to term the heavy crowds and traffic seen the day after Thanksgiving in Philadelphia sometime during the 1950s and 1960s. Another theory states that the term comes from the time of year during which retailers “see black” in their finances due to the influx of shoppers. Many stores used to use the day asthe start of advertising for Christmas, but today many stores do not observe this.

Black Friday crowds have gained a reputation for aggressiveness and violence. Before the doors to stores open, 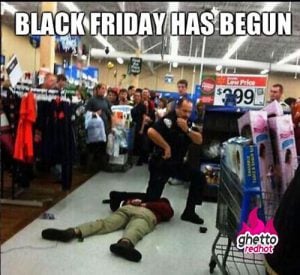 crowds will gather and often fight amongst each other for a closer spot to the door. This sometimes results in fights or trampling when the doors finally open. Inside, customers will come into conflict over the availability of merchandise or what they may consider rude or violent behavior.

This violence has increased in past years. In 2006, a man was assaulted on video at a Best Buy and Wal-Mart shoppers crowding outside a Columbus, Ohio, store shoved employees against shelving. That same year, a California mall’s practice of releasing gift certificates from the ceiling injured nine people. A Wal-Mart employee in 2008 was trampled to death when shoppers refused to make room for him, even for the police and medical assistance that arrived to treat him.

There have been many other instances of assaults and arrests, including shootouts and the use of pepper spray to get ahead in line or over a parking space.

wpDiscuz
0
0
Would love your thoughts, please comment.x
()
x
| Reply
Subscribe to our Newsletter!
Upgrade your life, one email at a time.