What is the Temple of Artemis at Ephesus?

The Legend of Artemis 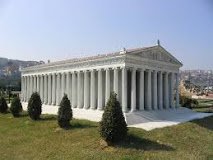 There isn’t a lot of information pertaining to the first building of the Temple of Artemis. It was determined by modern archeologists that the site of the temple had sufficient evidence to suggest that three successful temple attempts were conducted. There were indications that the temple had stood during the Bronze Age.

The second phase of the temple building was sponsored by Croesus, who founded the Lydian empire and was the current overlord of Ephesus during the time. It is believed that the second phase of construction started during 550 BC. The architect for the project was a Cretan known as Chersiphron and his son and helper Metagenes. The dimensions of the temple were 115m long, 46m wide, and built exclusively using marble. The columns were 13m high in a double row formation. There were a total of 36 columns that all were decorated with extensive carvings. Visitors would pay homage to the goddess Artemis with various goods and jewelry. The temple became a spectacle of legend, having boasted protecting Heracles, the Amazons, and Dionysus. The second phase temple met destruction in 356 BC by arsonist Herostratus. This time coincided with the birth of Alexander the Great, so many faithful people believed that Artemis was busy supervising the birth of Alexander the Great to protect her temple.