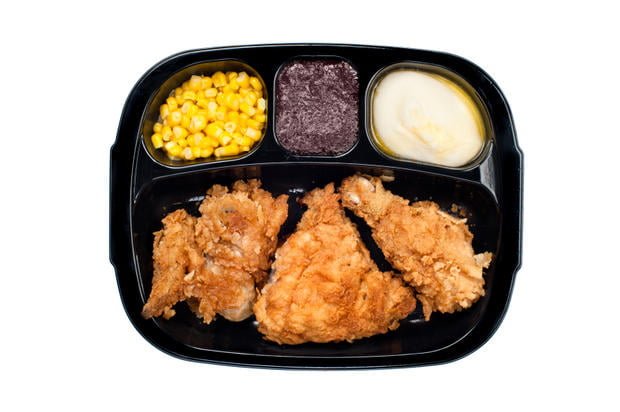 A TV dinner is a prepackaged meal that is typically frozen until it is ready to be cooked. TV dinners come in sectioned dishes that supply individual portions of different foods. The largest portion will hold the meat or main dish while the smaller portions will hold the side dishes and the dessert. Favored by single parents and shift-workers, this convenient well-balanced meal is easy to prepare with limited time. TV dinners are some of the fastest meals to prepare because all they require is a microwave oven to cook the dish. There are hundreds of different varieties of TV dinners available and range in age from child friendly to adult on a diet friendly. TV dinners are a staple in many American households.

TV dinners were first introduced in 1953, by C.A. Swanson and Sons. The introduction of TV dinners changed the meal industry. Families in America, were able to put dinner on the table in seconds instead of spending hours preparing meals. With the Second World War ending less than 10 years previously, this allowed many families to have both parents working and still allow them to have food on the table. TV dinners were also a cheaper alternative and provided the same well balanced meal.

One of the first TV dinners was a Thanksgiving turkey meal. It came with sweet potatoes, peas, and cornbread dressing. The first TV dinner tray was aluminum and each of the different foods had their own compartments. The aluminum tray would be set in the oven and heated for a minimum of 25 minutes. Today TV dinner trays are made from microwave safe materials and heat up within minutes. The whole dinner costs less than $1 per tray and within the first year of production, Swanson sold millions of TV dinners, far exceeding their expectations.

There are many different ways to celebrate National TV Dinner Day in the United States. The most popular is by indulging in your very own TV dinner. There are thousands of different food combinations available so there is something for everyone. TV dinners have evolved and now provide children with dinners that are fun and desserts that are delicious. They include large servings for hard working individuals that come home hungry. They even provide nutritious meals for men and women that are watching their figures.

TV dinners offer an affordable and convenient ready-made meal that can be enjoyed by the whole family. They provide working parents with a fast meal alternative for their children as well as a quick work lunch for themselves. If you are a college student living on a small budget then this is a cheap way for you to eat while you study. TV dinners truly are a universal meal whose convenience and cost-effectiveness gave rise to this booming industry.